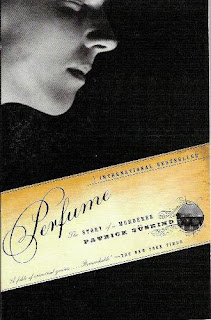 I have a dear friend & loyal reader who gives me a hard time about my book selections, particularly those I choose for the beach. This review of Perfume is for her.

For those who don’t know it, I have a penchant for the dark. Not vampire-dark or science fiction – but the dark that comes from the fantastic or even bizarre of human nature. I’m sure it explains my affection for Flannery O’Connor and Faulkner. Nonetheless, while most of my fellow book lovers choose “light” and “fluffy” for their summer beach reads, I take with me the likes of Middlesex and Absalom, Absalom.

And so, carrying with me the novel Perfume on my summer jaunt was not a stretch.

Perfume is the story of Jean-Baptiste Grenouille, a murderer. Born in the 18th century a bastard, Grenouille – an undefinably strange child – is passed from wet-nurse to wet-nurse until he finally lands in a horrid orphanage where he exists until he is able leave and survive on his own.

Grenouille owns two remarkable traits: he does not possess human odor, and, conversely, he has the superhuman ability to detect, identify, distinguish, classify and recall smells.

His ability to discriminate scent is so precise that he uniquely identifies every human being he comes into contact with. From this ability is born an obsession when Grenouille crosses a “golden thread” – a smell so remarkable and so perfect that he must seize and possess it – it is the scent of a young maiden. So begins Grenouille’s quest for a method of preserving the smell, a quest that leads him to the trade of perfumery and to the status of serial murderer.

I’ll save the details of how the story precisely unfolds for those who may, after reading this review, decide they’ll attempt to extract their own enjoyment.

I was recommended Perfume by several avid readers who wouldn’t reveal more than the fact that for them, Perfume gave a new standard by which to judge the dark. And indeed, with the subject matter as described, there is no avoiding the grotesque. But what happens to you as a reader on this journey is quite remarkable.

First, knowing the topic and where the story will eventually end, you become increasingly appreciative of the time spent building the crescendo because that means less time can be spent with what is truly repulsive. Then, the plot quickens, and you are drawn more to the narrative and less to the description of character and setting that has primarily carried the story thus far. Finally, the book ends and leaves you, much like the characters at the finale, embarrassingly satiated.

You have been completely caught up in and have fully enjoyed a novel whose topic is so disgusting, your shame prohibits relating its topic to mere acquaintances. And so I understood the reservation that accompanied its recommendation, for no one would wholly claim an affection, and instead stopped just short, urging a need to share a consummation of the experience of reading this story.

Years ago I set out to give books a rating – one through five – and five’s were defined as those books that were so superior to others that I loved reading them and wanted everyone I knew to also have the same pleasure. This was what for me defined excellence – could anyone, whether frequent reader or not – so enjoy the story that I would encourage all to partake? Perfume has made me rethink my definition.

Perfume, for me, is a five. One of only two that I’ve read this year so far. However, I would not suggest that all take this one on. In fact, I wouldn’t even recommend it for all avid readers. For example, I’ve spoken briefly with my mom about it, and haven’t decided to what degree I may suggest she read it.

But for those who share my penchant for the dark, let me invite you to this “ghastly” story. You won’t be disappointed.