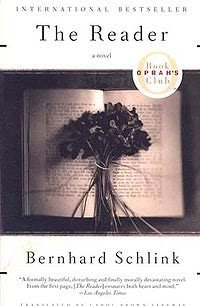 I was with a group last night & we were talking about The Reader. I left with more questions than answers. It has been a while since I read the book, and I saw the movie a month or so ago.

The movie was ok for me. If you’ve read the book, you know how short it is & so to make it a full length movie, they had to add to it. When I read the book, the climax for me was the court scene. But with the movie, and the additions, the court scene was practically in the middle of the movie – maybe even a little earlier. So, I wasn’t crazy about the movie, because I left feeling like the structure of the plot had been changed. But what if it wasn’t – what if the climax is really the suicide, as one person suggested last night.

Flannery O’Connor wrote that in every good story there is a point where grace is extended, and it can be accepted or rejected. Often this is the climax. And when I was reading the book, this was the court scene. Hanna is offered a chance to get herself off the hook, but to do so, she must admit she is illiterate. Her pride ‘goes before her fall,’ and she goes to prison. (And just for the sake of anything that may follow, I do believe that it is pride & only pride that causes her to make this decision.)

But what if the climax is her suicide? She’s been in prison, paid her dues & is about to get out. She’s learned how to read using the tapes Michael sends her. Michael has agreed to help her find a place to live & get a job. So maybe this is the true extension of grace, that she (again) rejects.

So perhaps in the court scene, she realizes her guilt – there is a moment where it seems she understands for the first time the horror of what she caused by not opening the doors of the burning church – and accepts responsibility for all the deaths she caused. In this way, going to prison becomes a step in her journey of growth.

I just can’t get there.

But I can see the pinnacle of the story being Hanna’s suicide. It is a grander rejection of grace to reject it from Michael than to reject it from the judge. (And, in this case, the movie doesn’t change the structure as much – so I become less bothered.)

Another good point that was made last night is that Hanna is mean. She has a cruel streak that may indeed be from insecurity and self-loathing because she’s illiterate, but nonetheless, it is there. For me, her suicide is her final act of cruelty toward Michael. Here he has spent years making all these tapes for her, that she has used to overcome her ‘flaw’ and instead of giving him the chance to have a relationship with her as a whole person, she kills herself.

You always hear people say that suicide is the most selfish act a person can make; very true for this story.

Anyway, there is much more that could be talked about regarding The Reader. . . if you want to discuss further, please comment!

One Reply to “The Reader. . .spoiler alert!”