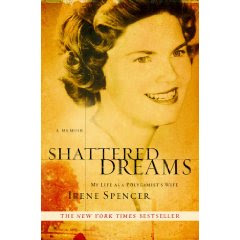 I recently finished Shattered Dreams: My Life as a Polygamist’s Wife by Irene Spencer. This one gets 5 stars in my book.

I became intrigued with the lifestyle of polygamists last fall when their children were being taken out by the bus load from a Texas commune. The pictures of the women so vehemently defending their husbands, the lifestyle and even their “sister-wives” was disturbing. I mean, how in the world can a woman “sign-up” for sharing her husband – in some cases with several other women? How do they deal with jealousy, back stabbing and the female cat-fights? How could they justify approving of marriages of their young daughters to men twice or more their age? And, what about the inevitable poverty that comes from one man trying to support so many women and children?

Well, if there were any doubts that these are the realities of living in polygamy, there are none now. The horrors are exactly as one would imagine. Jealousy is rampant, motivating some wives to ultimately leave, and a hierarchy inevitably is established with priority going to particular ‘favorites’: the first wife, the first wife to produce a son, the youngest wife and the seventh wife (giving the husband his ‘quorum’ that gives elevated status in heaven.)

One surprise for me was regarding sex – you’d expect these husbands to be “sexed-out” with so many wives, but supposedly living according to the ‘principle’ (polygamy) means that sex is only for procreation. Thus, sex is infrequent for the wives. Irene even tries to hide pregnancy from her husband so that he’ll sleep with her. This is probably her greatest struggle – the strong desire for love, affection and intimacy with her husband and receiving it so infrequently, due not only to having to share nights with other wives, but the doctrine about sex and his taking jobs for long stents in the US to make more money to send back to the wives.

One side note about sex, while this is the doctrine of the church, Irene lives in constant suspicious that her husband doesn’t keep to this ‘doctrine’ with some of his other wives & so is incessantly bitter about the lack of intimacy in her own life.

Living by the ‘principle’ means a certain cruelty for the wives. Subsequent marriage ceremonies require that an existing wife ‘give’ her husband to the new wife. Once Irene’s husband decides so quickly to take another wife that he doesn’t have time to buy a wedding ring & so Irene is forced to give her wedding ring up so that there is one for the ceremony. Another time her husband berates her after a ceremony because Irene didn’t remind him that he had scheduled this wedding on the same day as his anniversary to his first wife – knowing correctly he’ll catch hell when she finds out. (They end up lying about the day the wedding took place.)

Irene and her children live in severe poverty, health care is practically non existent, most of the homes don’t have running water or electricity, and whole (large) families live in 2 & 3 room shacks, trailers or campers. I can’t imagine the mental and emotional anguish she endured for 28 years. As a reader you are waiting expectantly for the husband’s death (not a spoiler if you look at the pictures in the book – there is one of all his children at his funeral.)

So how does Irene justify this life? Religion. She lives with immense guilt over her desire to leave. Born to a mother who lived in polygamy but left, she’s pulled from both sides (before Irene marries, her mother sets her up with a man Irene falls in love with who wants to marry her & live in monogamy) but Irene can’t escape the haunting feeling that she’s damning herself to hell if she doesn’t live according to the ‘principle.’

If you liked The Glass Castle, you’ll enjoy this read. You’ll be shaking your head throughout thinking, “how in world, in this day & age?”