Skip to content
Book Challenges
Here’s a summary and update on the challenges I’m participating in 2010.

2010 Mixology
This is less of a challenge and more of goal setting for the year. The purpose is to get you thinking about how many books you want to read and what ‘mix’ of books that will include. All the details are here.

You can find the rules for the TBR Challenge here, and my initial post about it is here. And, three frequent readers of BBB have posted their lists here.
My list of books for this challenge are here. (If they are highlighted, that means they have been read and reviewed.)
Who Moved My Cheese by Dr. Spenser Johnson
Hateship, Friendship, Courtship, Loveship, Marriage by Alice Munro
The Children’s Book by AS Byatt
The Handmaid’s Tale by Margaret Atwood
Abide with Me by Elizabeth Strout
The Art of Keeping Secrets by Patti Callahan Henry
Nineteen Minutes by Jodi Picoult
The Senator’s Wife by Sue Miller
Into the Tunnel by Goltz Aly
She’s Come Undone by Wally Lamb
Saints at the River by Ron Rash
The Girl Who Stopped Swimming by Joshilyn Jackson

Alternates:
1984 by George Orwell
Brooklyn by Colm Toibin
The Return by Victoria Hislop
The Known World by Edward P. Jones
The Girl with the Dragon Tattoo by Stieg Larsson
The Stone Diaries by Carol Shields
A Walk in the Woods by Bill Bryson
Into Thin Air by Jo Krakauer
Change of Heart by Jodi Picoult
Juniper Tree Burning by Goldberry Long
The Thief Taker by Janet Gleeson
Austerlitz by W.G. Sebald 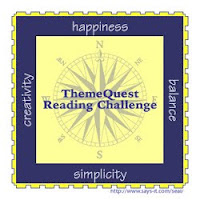 ThemeQuest 2010
Seven books with the same theme; I’ve chosen “the power of the written word.” At least two fiction and two non-fiction. All the rules are here. I’ll keep a list on this page, and the title will link to its review. You can find the themes and lists for readers of BBB who joined with me here.

1. The Elegance of the Hedgehog
2. The Hour I First Believed
3. Reading Lolita in Tehran
4. My Name is Memory
5. Founding Brothers
6. People of the Book
7. The Bible